Recently I discussed how an essentially Russian company pretends to be American. Now I want to report some clever American fraudulent misrepresentations. You will find a lot of these in the alcoholic beverages business. Stella Artois is the latest one I found, after I discovered the fake German Beck’s beer in American circulation.

So you go to the store to buy some European beer, because in that moment, on that day, that’s what you want to drink, and you see this bottle, and you quickly recognize it’s 330 ml design (11.2 fl oz) and, of course, the label. Look closely at the top, that’s the most you see when you grab the six-pack out of the fridge, the top label is in French, not just the Stella trademark, and the price is high as if it’s an import. 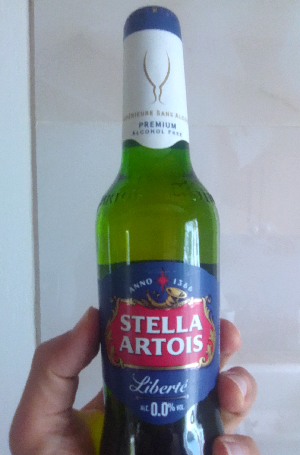 You have to rotate the bottle and read the fine print 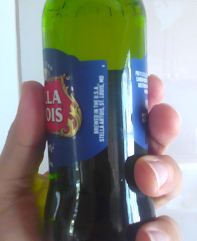 “Brewed in the U.S.A.” Well this is good but there are two problems. First, the bottle, label, and even French words on the bottle allude to a European “original” origin, when it clearly isn’t. If I wanted an American beer, I would have bought a different brand. If they wanted to impress the buyer that they now support American jobs, which is great, they should have bottled it in a 12 fl oz bottle, and placed a nice US flag on it, and used English language, and put a bold text on it to unequivocally state this is American beer. But it isn’t and the note on the side is too small and printed vertically where you are unlikely to discover it until you take it home. Obviously I would not have bought this if I had known its real origin.

So what’ s going here? For me, it’s clear case of fraudulent misrepresentation. The European bottle is cloned and filled with different beer. The are no words saying the bottle is European, but the entire appearance is making the claim indirectly. What are they going to do next, sell a Porsche with a Chrysler interior?

A different example is American “Champagne”. I found this also totally fraudulent beyond belief. Unfortunately I don’t have a photo but the principle is identical. The label on the bottle is in French, with bold words “Champagne”, which is a protected designation of origin in the EU. It’s a place not a thing. You can’t put the name of a place on the bottle and then fill it with stuff from other places. Well, you can, if you want to be a fraudster, I guess….

And the Net Result Is….? No More Stelle Artois, Ever!

After this experience, I’ll never buy Stella again, nor Beck’s, whether it’s the “real” one or not. I can’t forgive or trust a company lying so blatantly. It makes me wonder what else they are lying about. Who knows what is inside the bottle. As you can see there are no ingredients listed in the U.S. Apparently you are not supposed to know what you are drinking anyways, so who cares where it comes from, right?