Would you like to map your Amazon S3 bucket as a real drive in Windows? There is a nice tool for that named DriveMaker, which does exactly that. Once you have your S3 bucket mounted as a drive, you can use any application in Windows to access it directly. It works even at the command prompt and from within batch files and PowerShell scripts, anti-virus scanners, etc. It’s like a local network drive on your own machine, but showing up as a real physical drive.

For example, you can map your Amazon S3 bucket to X:\ and then edit Word documents directly in it, without having to download and upload the file by hand. In addition, you can copy and paste files in Windows File Explorer, exactly as you do with any other drive. A nice tool inside DriveMaker is its Sync ability. You could run sync tasks automatically or at the click of a button, to synchronize files in the cloud with your local copy or vice versa.

Once you install DriveMaker, simply click ‘add site’ and enter all the Amazon S3 information, as shown in the example below: 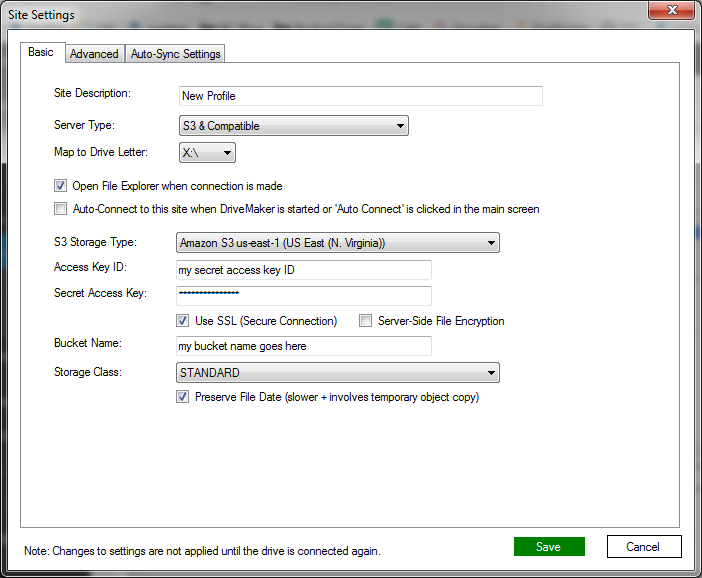 The above example maps our Amazon S3 bucket to drive X:. Once you save the profile and click connect, the drive X: will open in Windows File Explorer. It’s then available to work like any other drive.

Map S3 as a Mounted Network Drive on all Windows Platforms

DriveMaker runs on all Windows platforms. Windows 7 to Windows 11 PCs and Windows Server 2008 to 2022. You can start it automatically with Windows and sites can be configured to auto-connect if you like.

AWS was launched in 2006 to provide developers with on-demand IT infrastructure; from the beginning, the focus was primarily on enterprises rather than end users. The company needed globally distributed data centers and highly available services for the operation of its e-commerce platform itself, as well as interfaces to other applications, which were also to be made available to third parties with Amazon Web Services. However, Amazon did not take this step to better utilize its capacities. The first AWS virtual server service was designed at one of the company’s sites in South Africa.
Amazon Web Services are offered partially free of charge. In November 2010, it launched a program called the Free Usage Tier, which includes computing power (750 hours) and other popular AWS services on a limited basis. At the end of the first year, customers must switch to a commercial plan and pay the usual fees. The introduction of a free contingent was widely seen as a reaction to OpenStack, which is being pushed by rival company Rackspace in particular.
Amazon also operates development centers in Germany, Romania and the Netherlands, where it is working on future technologies for AWS. In Frankfurt am Main, the group operates three data centers.
In October 2021, AWS received a major contract from the British intelligence services (MI5, MI6 and GCHQ) to build a cloud system for classified data in the UK.

The EC2 (Elastic Compute Cloud) are virtual servers running either a Linux distribution or Microsoft Windows Server. They have no fixed contract term and are billed by the hour or even by the second. There are several tariffs to choose from, which differ based on the available RAM and compute units, which correspond to virtual processors. Compared to other providers, virtual machine instances are not persistent. That is, the contents of the RAM are deleted when the instance is stopped.

S3 (Simple Storage Service) is a file hosting service that can theoretically store any amount of data and is billed based on usage. Access is via HTTP/HTTPS. Amazon first introduced the concept of buckets and objects, which resembles directories and files and has become a standard that other providers are emulating. Amazon also offers network drives with Elastic File System and file archiving with Glacier. Amazon promises a “99.9999999” percent data shelf life.
Amazon Elastic Block Store (EBS) provides block-level storage that can be attached to Amazon EC2 instances.

CloudFront is a content delivery network that can deliver content from other AWS services, such as EC2 or S3, in a globally distributed manner to reduce access time. The service is limited to the HTTP(S) protocol and is charged by gigabyte accessed depending on the region. Depending on configuration, individual files or entire domains can be provisioned via CloudFront, optionally encrypted via SSL. In addition, Amazon operates a domain name service under the name Route 53, which enables the reciprocal translation of IP addresses and domains. Billing is staggered according to zones used.

Either SimpleDB or Relational Database Service (RDS for short) can be used as a virtual database. The former is intended for storing simple – that is, non-relational – information that can be structured in the form of objects and properties. SimpleDB is still in beta testing, according to Amazon, while RDS is officially supported. The Relational Database Service includes a virtual database based on either MySQL, Microsoft SQL Server or Oracle. While SimpleDB is billed solely on the amount of memory used, Amazon RDS rates are based on memory and processing power of the selected instance.

Amazon offers Elastic Beanstalk, a PaaS for Java, Python, Docker and other platforms. In addition, with Simple Workflow Service (SWS), Simple Email Service (SES), Simple Queue Service (SQS) or Simple Notification Service (SNS), further services are provided for developers. The latter is suitable, for example, to send notifications about certain events of other AWS services via email or SMS. Furthermore, applications can be deployed on Amazon Web Services in the so-called AWS Marketplace, where they can be booked by third parties.

AWS Identity and Access Management (called IAM) is a directory service for managing users and resources in an organization. Without Amazon IAM, login to any AWS services is limited to the personal Amazon account, which grants administrative rights and may be a security risk in production use. Identity and Access Management can be used to create users, group them, and control their access to virtually any AWS service, such as EC2 or S3.

In recent years, Amazon has developed numerous web services that serve to manage the core offering. For example, in May 2009 Amazon CloudWatch introduced the possibility to monitor virtual servers on EC2 and, if necessary, to automatically adjust the selected tariff and its resources based on the utilization (scalability). Since the beginning of 2012, a dedicated network connection to Amazon Web Services can be established with Amazon Direct Connect, which is implemented via third-party web hosts and is intended to facilitate the transfer of large volumes of data and improve IT security and data protection.

While all other services are based on technical services, Amazon Mechanical Turk (after the English name of the shaft Turk) is an exception: jobs can be posted there that can be broken down into small tasks and processed by humans. This includes, for example, simple search jobs on the World Wide Web or the correction of spelling mistakes in individual sentences. Mechanical Turk is also widely used for recognizing objects in images (such as humans or animals). The service is still in beta testing.

Due to the fact that Amazon is a US company, Amazon Web Services, like comparable services, has been criticized in Germany for years with regard to data protection. To compensate for the problem, Amazon offers so-called regions, which in turn are divided into Availability Zones and correspond to physical locations for storing data. For example, for Amazon EC2, the regions Ireland (eu-west-1) and Frankfurt am Main (eu-central-1) can be selected so that instances will only run there. Since 2007, regions outside the United States have also been available for Amazon S3. However, servers located in the EU do not protect against access by U.S. authorities under the Cloud Act.
To improve data protection, Amazon also explicitly grants developers the ability to re-encrypt data stored on AWS themselves – even when using an official software development kit. Large enterprises are permitted to use hardware encryption with individual components.

Serious security vulnerabilities in Amazon Web Services have repeatedly become known, which is why the platform is viewed critically by experts. In addition, it became known in 2013 that Amazon had received a major order from the CIA and would operate its public cloud, which raised further doubts about the data protection of the offering. Amazon prevailed with AWS in the award against IBM and other applicants.
In December 2010, Amazon Web Services was briefly used by WikiLeaks to reduce the load on their own servers. These had come under pressure due to the publication of diplomatic dispatches and at times could no longer deliver the content at all. Amazon blocked access for WikiLeaks shortly after the customer relationship became known, because “illegal material” had been made available there, according to an official statement from the company. Observers, however, assumed political pressure as the decisive reason, especially on the part of Senator Joe Lieberman. Amazon’s decision was met with public controversy and achieved widespread media attention.
Amazon claims to protect its data centers according to industry-standard procedures, particularly from power outages. However, the company has come under criticism because serious problems occur time and again nonetheless. For example, a lightning strike in August 2011 caused services at the Irish data center to be unavailable and numerous other online services to go down as a result. The case attracted widespread attention, as Microsoft was also affected in addition to Amazon. In July 2012, a similar fault occurred, which was absorbed by the emergency power supply, but which in turn also suffered a technical malfunction a short time later. After the triple outage, Amazon was accused of insufficient testing of its systems. Most recently, an outage in August 2013 disrupted Vine and Instagram, among others.