Check this out. First of all, WARNING: racist images (not mine) are following. After a chat with some new people I met, their last name reminded me of a TV ad from 1986. Back in the day in 1986, the Chernobyl disaster days, back in Germany where I lived at that time, there used to be some sweet marshmallows that we liked to eat. Sometimes the teachers would bring them to school and “reward” us like rabbits for a job “well done”, like homework, etc.

The ad is this one:

I still remember it vividly, yeah the good old days! And then this very strange thought came up, after thinking for a while, the word negro (German “Neger”) kept popping up in my head and I was wondering why. Before you pull your gun out, No, I’m not a racist, but racism is exactly what I want to address here.

Because back in the day, and I had to think about this for a whole hour to remember it correctly, back then, these chocolate covered marshmallows from the ad, where called Negerküsse. Do you what that means? Literally translated “Negro Kisses“. Swallow that one my friends!

But wait there is more!

You need to see something else: Yes back in the day, a “negro kiss” was something the kids went nuts for. We ate the whole box. But the company from the ad, the box you have seen there, was just one manufacturer.

A different manufacturer had this design, which I also remember well: 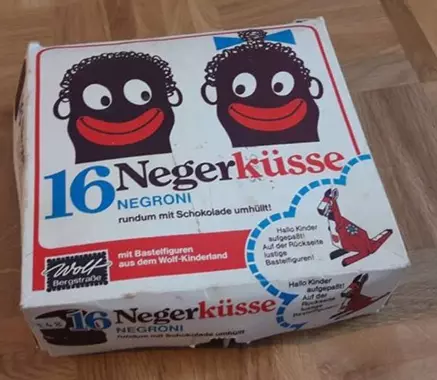 I don’t think have to describe how shocking this is to see it today again. Yeap, but those were the days in 1986 in Germany. 16 “Negronis” in a box to make your kids happy.

In 1986, like all kids we had physical education classes. Check this out, we played a game called “Wer hat angst vor’m schwarzen Mann?” Translated: “Who’s afraid of the black man?”. Basically you ran and if the assigned ‘black man’ touched you, you were out. Fun game. Not so fun is the reaction I see now in the media, trying to cover up the unbelievable, institutional racism of this game, spread by all schools and kindergartens, with a silly history lesson, claiming that this game had nothing to do with black skinned people. “No, we aren’t racists. This game is about the pest in the middle ages”. Whatever, man!

Who cares about the game’s history? When you tell 5-10 year olds, let’s play “who’s afraid of the black man?”, what seeds are you planting into the kids’ minds? What’s the take home message? Did we ever get a history “disclaimer” from our teacher, that it doesn’t mean this but means that instead? No we didn’t. The term “black man” had one and only one meaning. I don’t think that I go too far if I claim that it was games like these that instilled a fear of dark skinned people and people of other ethnicities. Xenophobia is the word really.

But what I found the worst thing ever about living in Germany, and I bet things haven’t improved much since, is that no one cared. If you tried to explain how racist this and other phrases or behaviors or laws in German used to be / and many are still being used, people called you “oversensitive“.

That’s of course typical for racists: they blame the victim.

And if I had to pick one single thing that really makes America the greatest country, it’s that it has a basis, a legal and now also a cultural one, to successively recognize and abolish racism. At least here you will find a large group that will recognize racism in its many forms, and do something about it. Something like the Civil Rights Act didn’t even exist in Germany until very recently. But it doesn’t have the same “punch” as in the U.S. The laws in Germany are a joke. Above all, the people in Germany never appeared (to me at least) as united against racism as Americans.

Don’t get me wrong, I’m not implying that there are no racists in America. In fact, in the U.S. I have met the worst racists ever, and the most violent ones, too. However, here you can likely do something about it, whereas in Germany, at least back in the day, I don’t know how much has improved since, back in the day, the entire country, the TV, the state, the law, the school, the teachers, your neighbors, all of them were “bathing” in racism and wouldn’t even recognize it.

Denial, is the word and the reaction you would receive if you dared to bring up the racism subject.

Yes I got tired of being pulled over by the police once every month, sometimes twice within an hour, for no reason. And, no I never went over the speed limit or drove drunk or had a broken light. We all know what’s going on…

And reflecting back at those days, I have only one thing left to say and that is “God bless America”. As far as racism is concerned, all other countries still have a long way ahead of them…